For several decades, Quebec has been one of the Canadian provinces in which public spending, the tax burden, and the debt level are the highest. One of the Quebec government’s main challenges is therefore to reverse these three trends in order to improve the dynamism of the province’s economy and to allow the population’s standard of living to rise. How does Quebec’s current government compare with the other provincial governments in achieving these goals?

Viewpoint – Budgetary and Fiscal Performance: Quebec among the Most Improved Provinces

For several decades, Quebec has been one of the Canadian provinces in which public spending, the tax bur-den, and the debt level are the highest. One of the Quebec government’s main challenges is therefore to reverse these three trends in order to improve the dynamism of the province’s economy and to allow the population’s standard of living to rise. How does Quebec’s current government compare with the other provincial governments in achieving these goals?

Each year, the Fraser Institute publishes a report comparing the relative fiscal performance of the provincial premiers in three categories, namely 1) government spending, 2) corporate and individual taxes, and 3) deficits and debt. Given certain changes of government, some premiers were evaluated over longer periods than others, and four of them are no longer in power.(1)

The Philippe Couillard government, whose performance was measured for the 2014-2015 year, does very well in this ranking with an overall score of 78.2/100, putting it in second place just behind the Christy Clark government in British Columbia (78.5) and far ahead of the Kathleen Wynne government in Ontario (61.4) and the former Alison Redford government in Alberta (53.8) (see Table 1). The governments of three Atlantic provinces, namely New Brunswick, Prince Edward Island, and Newfoundland and Labrador, all receive scores below 50. 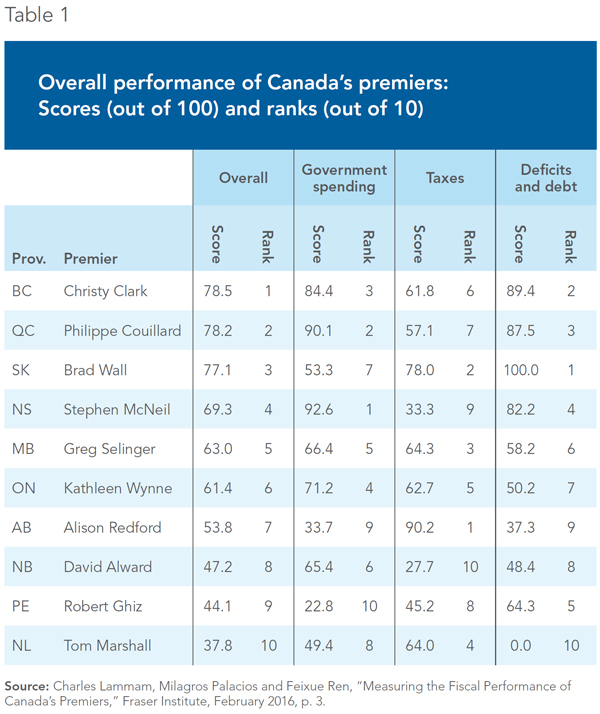 It is in the public spending category that the Couillard government obtains its best score. This calculation is based on two specific measures, namely the percentage point difference between the growth in government program spending and, on the one hand, economic growth, and on the other hand, the total of inflation and population growth. This criterion is therefore focused on the variation of public spending, and not on its level. Governments having increased spending faster than their province’s economy, or faster than inflation and population growth combined, obtain lower scores.

The government of Quebec distinguishes itself by being one of only two provinces (the other being Nova Scotia) to have done the opposite, which is to say, increased its program spending less quickly than these other factors. In other words, the relative weight of the state decreased in Quebec in 2014-2015.

Quebec Taxpayers Still among the Most Heavily Taxed

When it comes to income taxes, though, Quebec does not score very well, and continues to have some catching up to do, ranking seventh in this category. As in most other provinces except for Ontario, New Brunswick, and Nova Scotia, personal income tax rates at the income levels examined in the report have not risen in Quebec since the election of the Couillard government. However, Quebec suffers because its tax level is already extremely high. For example, it has the highest marginal tax rate in Canada at $50,000 of income, and the second highest at the $150,000 level.

Unsurprisingly, it is Alberta under Premier Red-ford that is ranked first in this category, with its history of favourably low taxes both for businesses and for individuals, although this situation may change with the recent election of a new government. The Brad Wall government in Saskatchewan for its part stands out as the only one to have reduced the average corporate tax rate since the start of its mandate.

Finally, the Couillard government is in an enviable position in the deficits and debt category, coming in third. Only Quebec and Saskatchewan reduced the size of their net debt as a percentage of GDP, respectively by 1.2% and 3.4% on an annual basis. Among the governments having generated budget deficits on average, Quebec’s is the smallest as a proportion of GDP. The two governments that surpassed it in this category, those of Brad Wall and Christy Clark, generated surpluses on average.

The public finances situation in Quebec has improved since the most recent election when compared to that of the other provinces. The Couillard government has among other things succeeded in getting spending back under control, and has put the brakes on the province’s growing debt.

There is still a lot of work to do, however, before catching up with the Canadian average, and even more before reaching a point that would be more favourable to growth. In particular, Quebec has a steep slope to climb to make its tax system more competitive. The tax burden explains why the available income of Quebecers is the lowest of all the provinces and growing slowly, a state of affairs which prevents many families from improving their lot.(2)

*This Viewpoint was prepared with the kind assistance of the Fraser Institute based on data contained in “Measuring the Fiscal Performance of Canada’s Premiers,” which is being published simultaneously. The MEI is nevertheless solely responsible for the content of the present publication.

This Viewpoint was prepared by Youri Chassin, Economist and Research Director at the Montreal Economic Institute, who holds a master’s degree in economics (Université de Montréal). The MEI’s Taxation Series aims to shine a light on the fiscal policies of governments and to study their effect on economic growth and the standard of living of citizens.