Today, 89% of Canadians adhere to at least one loyalty program (also called a reward program), and 41% adhere to a program that is connected to a credit card. In other cases, such programs are connected to stand-alone loyalty cards or smartphone applications. Many critics maintain that these programs do not really offer any benefits for consumers, and suggest that they should be regulated. What is the truth of the matter, and what effects have such regulations had in countries that have adopted them?

Media release: Tightening the screws on loyalty programs would penalize consumers instead of helping them

Are Loyalty Programs Bad for Consumers?

Canadians’ attachment to loyalty programs did not come about overnight. Michel Tremblay’s popular 1968 play Les belles-sœurs, a pivotal work in the history of Quebec drama, tells the story of a matriarch having won a large number of stamps as part of a loyalty program.

Today, 89% of Canadians adhere to at least one loyalty program (also called a reward program), and 41% adhere to a program that is connected to a credit card.(1) In other cases, such programs are connected to stand-alone loyalty cards or smartphone applications. They can be specific to certain retail chains, or apply to a variety of stores, like cards offering discounts on airfares.

Many critics maintain that these programs do not really offer any benefits for consumers, and suggest that they should be regulated. What is the truth of the matter, and what effects have such regulations had in countries that have adopted them?

Loyalty programs offer rewards in order to encourage customer loyalty to the stores and brands that finance them. In all cases, purchases earn points, and the value of re-wards increases with the number of points accumulated. Related fees vary according to the type of program, but beyond the annual fees of certain cards paid by the consumer, it is merchants who pay every time a card is used. These fees are fixed by the program operator in the case of cards like Air Miles and Aeroplan, or by the merchant’s bank in cases where loyalty programs are connected to a credit card.

While interchange fees (which is to say, fees related to consumers’ use of credit cards) can sometimes be high, there are also benefits for merchants.(2) In exchange for these fees, they can not only increase their market shares by encouraging customer loyalty, but they also gain access to the benefits of credit card systems, partially financed by loyalty programs. Credit cards offer protection against fraud and a guarantee of receiving payment, the immediate transfer of funds, greater personal safety since there is less cash in the till, and simpler accounting thanks to electronic data processing.

Down with Loyalty Programs!

Several interest groups have recently taken aim at loyalty programs. One claims that the benefits consumers receive are not worth as much as what the companies that manage them gain.(3) Yet the fact that these arrangements are voluntary, and the programs optional, should be enough to demonstrate that consumers believe they are getting a good deal when they use these programs.

Another criticism concerns the use of consumption data.(4) Companies that run loyalty programs do indeed use the consumption histories of their clients to send them advertising. Since they know consumers’ habits, they can better target their campaigns.

Some fear that the data collected will be sold to third parties and that it will be possible to identify each consumer individually. The major loyalty programs all assert that they do not sell this data, and are at any rate required by law to obtain prior consent from consumers in order to do so. Moreover, the data collected by the companies that run loyalty programs amount to intangible assets for those companies. It is in their interest to provide only limited access to these data to companies they collaborate with, and to arrange it so that these partners will always have to go through them. If they actually sold their data, they would deprive themselves of substantial revenues.

It is also sometimes argued that these programs are responsible for the over-indebtedness of consumers.(5) However, according to a recent Bank of Canada study, Canadian households’ average outstanding balance, which is to say the amount left to pay on their credit cards at the end of each month, is declining, even while they are increasingly using their credit cards to make purchases (see Figure 1). This means that they are less and less likely to carry forward their credit card debt from month to month. Indeed, the proportion of users who scrupulously pay their bills before the end of each month “grew from 48 per cent in the early 2000s to 55 per cent in recent years.”(6) 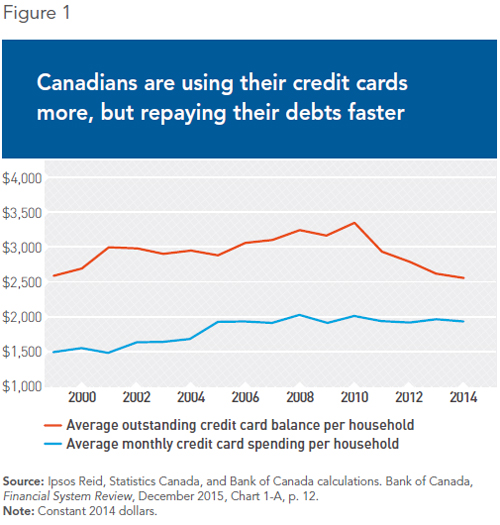 Credit cards are therefore increasingly being used as a payment mechanism rather than as a debt instrument. They are becoming the equivalent of debit cards that have the added benefit of offering reward points. This phenomenon is the opposite of what the critics denounce.

Another criticism levelled against loyalty program operators is that the value of points sometimes changes.(7) Unfortunately, this is an inherent risk for several kinds of assets. The values of stocks, for instance, fluctuate constantly, as do the values of houses. Even the value of money changes as time goes by.

Although it is impossible for them to guarantee the value of points over time, loyalty program operators depend on their reputations and on the confidence of their users. The best guarantee that the value of points will remain as stable as possible is the tenuousness of this bond of trust. If this bond were suddenly broken by an unreasonable devaluation of reward points, loyalty programs would undermine their primary objective of encouraging customer loyalty!

Finally, certain analysts believe that interchange fees are too high and should be limited by the authorities. Banks and credit card companies already made a voluntary commitment in the fall of 2014 to limit these fees,(8) yet interest groups nonetheless continue to demand more regulation from governments.(9)

As everyone knows, the road to hell is paved with good intentions, and sometimes measures that were well-intentioned can harm the very people they were meant to help. When this happens, we speak of the perverse effects of regulation. In other countries, several attempts to regulate interchange fees, and thereby also the loyalty programs financed by those fees, have had perverse effects. These arise when regulation is designed to directly affect interchange fees without taking into account that they are part of a complex ecosystem(10) which will react to this regulation.

For example, in 2003, the Australian authorities imposed an interchange fee reduction of approximately 50% and allowed merchants to apply a surcharge to purchases made with a credit card.

These regulations, intended to protect consumers, in fact ended up costing them quite a lot. The annual fees paid by consumers for cards like Visa and MasterCard without loyalty programs increased by 22%, whereas those for standard cards with loyalty programs and for “gold” cards increased by 77% and 47% respectively between 2001 and 2004, in anticipation of the regulatory change.(11) As for the value of rewards, it fell by 23% from 2003 to 2007.(12)

Although this interchange fee reduction did benefit merchants—an annual gain estimated at A$870 million—it entailed no reduction in prices for consumers.(13)

The Spanish authorities also imposed a reduction of interchange fees, by an average of 58.7% between 2006 and 2010. As a result, average annual fees grew from €22.94 to €34.39 over the same period.(14) Credit card interest rates also went up. The seven consumer protection associations contacted during the study found that, just as in Australia, there was no drop in prices attributable to this regulation.(15)

In 2010, the American authorities adopted rules leading to an interchange fee reduction of nearly 50% on payment cards,(16) with the same kind of perverse effect. The regulation of interchange fees provoked the temporary disappearance of numerous loyalty programs there. Whereas in 2010, before the law came into effect, the proportion of credit cards offered by banks which included a loyalty program was 66%, this figure had fallen to 37% in 2011 after the passage of the law, and to 24% one year later.(17)

Loyalty programs did come roaring back starting in 2013, however, thanks to a new formula financed directly by merchants.(18) Regulation therefore did not make these programs disappear, but led to a transition whose costs for consumers temporarily deprived of loyalty programs are difficult to measure, but are probably substantial.

Without these revenues, banks had to find new ways to finance the payment system. Whereas 76% of chequing accounts offered by banks were free in 2009, this proportion fell to 38% by 2013 after the new law had come into effect.(19) This increase in banking fees played a prominent role in the 821,000 additional households without a bank account in 2011 compared to 2009, a change that disproportionately affected the least fortunate.(20)

Once again, although merchants registered an estimated US$8 billion of savings, this measure did not lead to lower prices for consumers. In fact, interchange fees for small transactions exploded. As these fees are now calculated the same way regardless of the amount of the transaction, and they include a fixed portion as well as a portion that varies with the value of the transaction, they increased by up to 1,000% for the smallest transactions and have become negligible for large amounts.(21)

While those who supported this law unanimously claimed that it would lead to savings for consumers, the law instead favoured merchants selling costly items, to the detriment of merchants selling inexpensive ones, without consumers seeing any lower prices.(22)

As summarized in Table 1, in each of these cases, the regulations directly benefited merchants without leading to price reductions for consumers. Furthermore, given that the payment system must be financed somehow or other, the reduction in interchange fees pushed banks to look for other sources of revenues, which fell even more heavily on consumers. 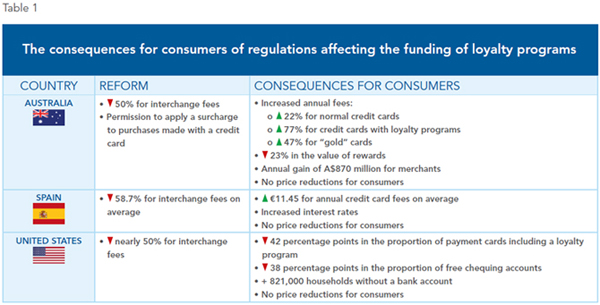 Government intervention in the economy often has unintended consequences that end up harming the people they are meant to help. Those who favour such intervention seem to imagine that they can manipulate the various members of society as easily as one moves different pawns around on a chessboard. They do not account for the fact that pawns on a chessboard have no impulses other than those of the hand that controls them. In a market economy, unlike in chess, each merchant and each consumer has his or her own motivations, which are not necessarily the ones that legislators would like them to have. Trying to help Canadian consumers by regulating loyalty programs would certainly entail negative unintend-ed consequences for them, as has happened elsewhere in the world.

This Economic Note was prepared by Mathieu Bédard, Economist at the MEI. He holds a PhD in economics from Aix-Marseille University, and a master’s degree in economic analysis of institutions from Paul Cézanne University. The MEI’s Regulation Series seeks to examine the often unintended consequences for individuals and businesses of various laws and rules, in contrast with their stated goals.