When Canadian consumers buy goods or services from retailers located outside their province, or outside Canada, it is very difficult to collect sales taxes on these transactions. Taxes on a certain portion of such purchases in other provinces and countries therefore go uncollected. The fact that these purchases are less expensive puts local online retailers, as well as brick-and-mortar retailers, at a disadvantage, as they are faced with a kind of unfair competition. Governments are also deprived, at first glance, of substantial revenues. What solutions are proposed to resolve this situation—and are they realistic?

Media release: Should sales taxes be applied to all of Canadians’ online purchases?

The Dilemma of Taxing Online Purchases

According to Canada Post, 76% of Canadian households shop online.(1) It’s a rapidly growing market worth an estimated 41.7 billion US dollars in 2015 (see Figure 1). When Canadian consumers buy goods or services from retailers located outside their province, however, or outside Canada, it is very difficult to collect sales taxes on these transactions. Taxes on a certain portion of such purchases in other provinces and countries therefore go uncollected.

The fact that these purchases are less expensive puts local online retailers, as well as brick-and-mortar retailers, at a disadvantage, as they are faced with a kind of unfair competition.(2) Governments are also deprived, at first glance, of substantial revenues. What solutions are proposed to resolve this situation—and are they realistic? 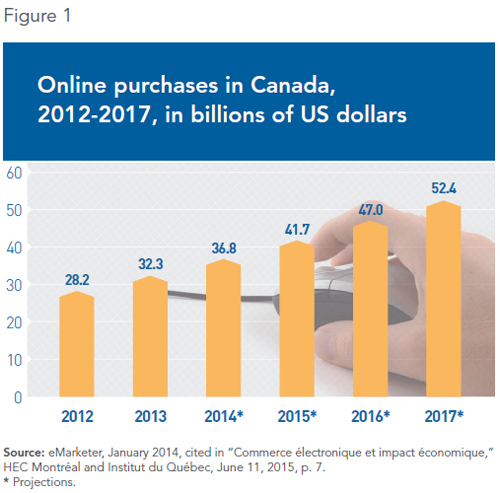 The solution adopted to reduce the size of this tax evasion in Europe was simpler rules and a more centralized collection mechanism.(6) In the United States, Congress has refused to address this problem related to interstate commerce, rejecting proposed laws like the Marketplace Fairness Act.(7)

A centralized collection mechanism, which would give the Canada Revenue Agency the mandate of collecting provincial sales taxes where this is not already the case, could also put an end to this problem in Canada. Provincial taxes would then be declared at the same time as the GST. Even though this solution does not pose any insurmountable institutional obstacles, it is not clear that the government of Quebec, nor those of British Columbia, Manitoba, or Saskatchewan, would be willing to relinquish this power.

The problem is much more complex in the case of online purchases of goods and services from companies in other countries. Currently, such companies are not required by law to collect sales taxes and remit them to the Canada Revenue Agency and its provincial counterparts. Aside from certain large foreign companies with a Canadian presence, like Amazon,(8) in many cases they do not do so.

Canadian consumers are then expected to pay sales taxes by declaring the GST themselves, and as the case may be, the provincial sales tax too. In practice, very few of these “self-assessments” are actually made. For example, Revenue Quebec registered just six in 2011, and five in 2012.(9) However, certain simple changes could be made that would encourage more Canadians to make self-assessments.(10)

Customs officers certainly have the mandate of filtering packages and applying sales taxes on products with a value of more than $20 when this has not been done by the retailer, as well as a punitive surtax of $9.95, but their resources are limited and they will never succeed in intercepting all packages.(11) Moreover, customs officers are powerless when it comes to digital goods and online services.

Certain voices in Canada are calling for an end to self-assessments, and for requiring foreign businesses to collect sales taxes directly. The Quebec government’s most recent budget, for example, asked the federal government to increase its efforts in this regard.(12) However, there is no reason to believe that foreign governments will be particularly cooperative in this regard in the short to medium term, even though the OECD is applying pressure for the signature of international agreements.(13)

Indeed, it is not in the interests of the tax authorities in one country to police millions of transactions and devote substantial resources to proceedings for the benefit of tax collectors in another country. Nor is it realistic to think that the United States, for example, would zealously apply such practices when it refuses to adopt similar rules for its own internal trade.

Other voices are proposing that sales taxes be collected by credit card companies, or by other intermediaries of the payment system like the banks or PayPal.(14) Beyond the difficulties inherent in each of these systems, requiring taxes to be collected abroad by these intermediaries would in any case necessitate the collaboration of foreign governments to provide a legal framework for these levies. These proposals therefore take us back to square one.

The Negative Effects of Sales Taxes

Avoiding the payment of sales taxes is obviously attractive to consumers. Studies have found that foreign electronic retailers sell more where local sales taxes are high.(15) Economic research also shows that sales taxes have negative effects on trade and on the economy in general.

According to a recent American study, a sales tax increase of one percentage point in one state entails an increase of nearly 2% in online purchases from the websites of companies set up in other, less heavily-taxed states, but a reduction in online purchases from local businesses of from 3% to 4%.(16) Sales taxes therefore hurt local retailers more than they benefit foreign retailers.

Another study reports that when the prices of online purchases abroad go up due to taxes, the resulting foregone purchases are not all replaced by local purchases. For transactions of more than US$250, only 10% to 56% of the lost sales are replaced by sales at brick-and-mortar stores.(17) This gap is explained by the fact that sales taxes reduce the real incomes of consumers.

We must therefore keep in mind that if, by some miracle, American retailers accepted to collect the GST and Canadian provincial taxes from their Canadian customers, it is not all of the foregone sales that would be recuperated by Canadian retailers. In up to half of all cases, consumers would simply abandon their planned purchases.

A study carried out in Colorado confirms these observations. Tax avoidance through online purchases increases the real incomes of consumers, but also, paradoxically, government revenues when the broader and longer-term effect is taken into account, mainly due to increased economic activity. According to the same study, if governments instead choose to increase their tax revenue in the short term by sacrificing their future revenues, they can only do so at the price of higher unemployment and reduced real household incomes.(18)

Conversely, reducing sales taxes has positive economic effects. According to a recent study in the state of New York, when sales taxes are reduced by 4 percentage points, online purchases outside the state fall by 15% in the five months that follow.(19) In other words, if sales taxes were lowered, local retailers would recuperate more Internet sales than if foreign retailers were obliged to collect sales taxes, all while increasing the real incomes of consumers.

Given that applying sales taxes to all online purchases would have substantial negative effects, and that there are nearly insurmountable obstacles to this solution anyway, the other extreme solution would be to reduce Canadian sales taxes considerably, or even abolish them, in order to make local purchases more competitive.

Such a solution also seems very unlikely to be implemented. Current sales taxes, including the GST, were adopted over the past few decades in replacement of other taxation methods deemed to be less effective and more harmful to economic growth. The Quebec government is even planning to increase its sales tax rate so as to reduce income taxes. Except in Alberta, the only province where there is still no provincial sales tax, the political context clearly favours maintaining or increasing sales taxes rather than abolishing them.(20)

Certain compromises seem more plausible, however. The first of these pragmatic solutions concerns digital goods. Given the practical impossibility of collecting taxes when these digital goods are purchased abroad, the federal government and the provincial governments could exempt them when they are sold by Canadian companies.(21) This measure would put Canadian and foreign suppliers of digital goods on equal footing.

A second compromise would be to have a reduced sales tax rate for electronic commerce. In this way, local Internet retailers would be at less of a disadvantage compared to their foreign competition.(22) This would not be without precedent: Many countries have two or even three sales tax rates that depend on the industry. Like all compromises, this solution is not ideal, given that it favours electronic commerce to the detriment of traditional retailing, whereas one of the main objectives of optimal taxation is neutrality. 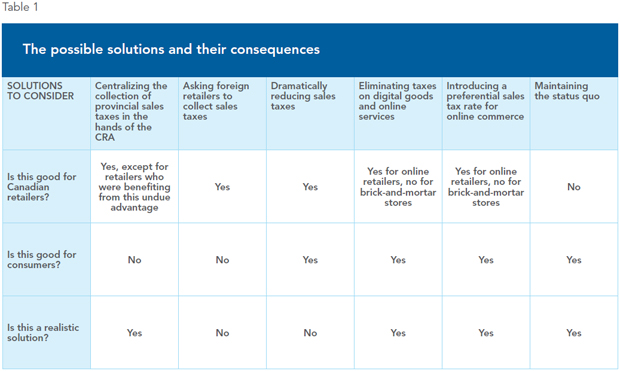 The current state of affairs places Canadian retailers at a disadvantage, whether they sell online or in a physical store, compared to foreign retailers. It does benefit consumers, however, who see their real incomes increase with the possibility of making purchases abroad without having to pay sales taxes.

Certain solutions could conceivably help resolve this problem, including centralizing the collection of provincial sales taxes, exempting the purchase of digital goods, and reducing taxes for online purchases. Given the difficulty of implementing international tax cooperation, however, it is unlikely that Canadian sales taxes could be effectively collected in the case of online purchases from foreign websites.

This Economic Note was prepared by Mathieu Bédard, Economist at the MEI. He holds a PhD in economics from Aix-Marseille University, and a master’s degree in economic analysis of institutions from Paul Cézanne University.