When a company seeks a place to invest, it needs to take into account the investment-related tax burden to be sure of choosing the most favourable location. Taxes that are too high in one city will lead companies to turn to other cities, bringing with them the new jobs and economic spillover that accompany their investments. Does the City of Montreal do everything it can to entice investors?

Viewpoint – Investing in Montreal: A Tax Burden That Ranks among Canada’s Highest

When a company seeks a place to invest, it needs to take into account the investment-related tax burden to be sure of choosing the most favourable location. Taxes that are too high in one city will lead companies to turn to other cities, bringing with them the new jobs and economic spillover that accompany their investments.

This choice is all the more crucial given that Canada’s most significant source of economic growth between 1961 and 2008 was capital investment.(1) To keep living standards rising for their residents and those in outlying areas, cities must therefore compete with one another continually to attract investment from the most mobile companies.

Does the City of Montreal do everything it can to entice investors? Despite enjoying overall operating costs that are among the lowest in the world,(2) Quebec’s biggest city undercuts its comparative advantage within Canada through an investment-related tax burden that is much higher than elsewhere.(3) By comparing the marginal effective tax rate related to new investment in various large Canadian cities, we can see that Montreal scores poorly, behind the major Western cities, Toronto, and Halifax.(4)

The higher this rate, the more the gains from investment will be eaten away by taxes. The marginal effective tax rate is a way of measuring incentives to invest that takes into account all the various taxes applied to future returns on current investments and all the subtleties of the tax systems, as well as possible tax deductions.(5) Punitive taxation of investment returns has an impact well beyond investors, slowing the increase of living standards of Montrealers and all Quebecers.

What Makes Up the Tax Burden 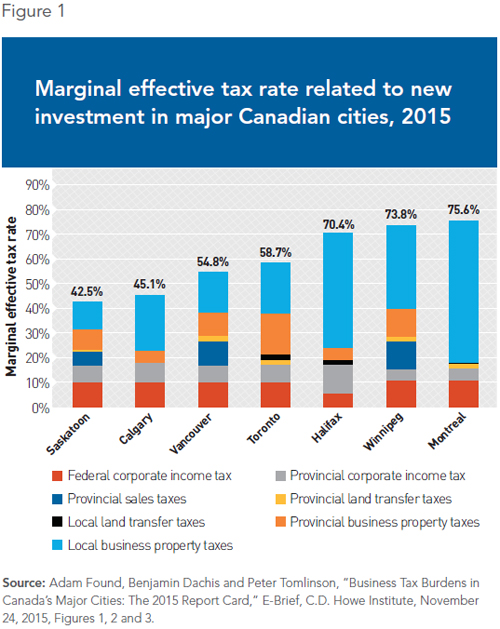 The difference between the tax burden in Montreal and the other big cities is not due to federal and provincial corporate income taxes. These are comparable in the provinces examined. Nor is it due to the Quebec sales tax. Like the harmonized sales tax in Ontario and the Atlantic provinces, the Quebec sales tax is borne entirely by consumers and does not affect investment, unlike the sales taxes in the Western provinces (other than Alberta), which are applied cumulatively at each step of production and therefore penalize investment.

Land transfer fees also account for a small portion of Montreal’s burden. If we add up those applied at the local and provincial levels, they are comparable to those of Winnipeg and Vancouver, and are even topped by those of Toronto.

These business property taxes, by their very nature, are very bad for investment. A study conducted in Ontario found that collecting an additional dollar in property taxes costs the Ontario economy $6.67 in lost investment.(8) In Montreal, where the property tax burden and the overall tax burden are heavier than in Ontario, it appears likely that this opportunity cost is even higher.(9)

The City of Montreal Is Mainly Responsible

The City of Montreal has made efforts in this area over the past two years, and its tax burden has declined by three percentage points compared to 2013. But this is a smaller decline than in Halifax or Saskatoon, which have made cuts of 5.6 and 3.7 percentage points respectively. Yet Montreal, which brings up the rear, has a greater need for improvement than Saskatchewan’s biggest city, which already ranked second in 2013, just behind Calgary.

Taxes are a barrier to investment in Montreal. The city’s many selling points, such as quality of life and reasonable labour costs, are undermined by taxes that are among the highest in Canada. Since the largest share of this burden comes from the municipal level, the City of Montreal has an interest in continuing its efforts to reduce its tax burden so as to attract the investments that will ensure its prosperity and the standard of living of its residents.

This Viewpoint was prepared by Mathieu Bédard, Economist at the MEI. He holds a PhD in economics from Aix-Marseille University, and a master’s degree in economic analysis of institutions from Paul Cézanne University. It was prepared with the kind assistance of the C.D. Howe Institute based on data contained in "Business Tax Burdens in Canada's Major Cities: The 2015 Report Card," which is being published simultaneously. The MEI is nevertheless solely responsible for the content of the present publication.

1. John Baldwin and Wulong Gu, “Productivity Performance in Canada, 1961 to 2008: An Update on Long-Term Trends,” Statistics Canada, The Canadian Productivity Review, No. 025, August 2009, p. 12.
2. KPMG, “Competitive Alternatives: KPMG’s Guide to International Business Location Costs,” 2014. This study covers operating costs in the digital services and manufacturing sectors: the costs of installation, labour, transportation and distribution, public utilities, financing, and operation-related taxes.
3. It is topped only by the tax burden in the main cities in two of the three Atlantic Provinces not included in this Viewpoint, which are much less important as business destinations than the cities selected.
4. Adam Found, Benjamin Dachis and Peter Tomlinson, "Business Tax Burdens in Canada's Major Cities: The 2015 Report Card," E-Brief, C.D. Howe Institute, November 24, 2015. The study focuses only on the biggest city in each province. Canada’s Finance Department also publishes, periodically and at budget time, a measure of the marginal effective tax rate by industrial sector, region and/or province. It does not, however, take into account property and related taxes, although these represent most of the investment-related tax burden in Canada. See Finance Department of Canada, Tax Expenditures and Evaluations – 2005, Marginal Effective Tax Rates on Business Investment: Methodology and Estimates for Canadian and U.S. Jurisdictions, October 21, 2008.
5. In its simplest form, the marginal effective tax rate is expressed as the expected pre-tax rate of return, minus the expected after-tax rate of return on a new investment, divided by the after-tax rate of return. Investment tax credits and depreciation allowances are deducted.
6. It excludes taxes that are not directly related to investments but are related rather to operating costs, such as payroll taxes, pension contributions, employment insurance contributions, and the billing of certain municipal services.
7. In Montreal, business property taxes are mainly municipal. These are the property tax, the special water service tax, the special road service tax and the investment tax in Ville-Marie borough. This category also includes the school tax, which is based on property. This tax accounts for only a small portion of local property taxes, however, with an average rate of 3.5%. Winnipeg is the only other city in this study with a local school tax. See the earlier versions of the Business Tax Burden Ranking, available on the website of the C.D. Howe Institute.
8. Adam Found, Essays in Municipal Finance, University of Toronto thesis, 2014, p. 142.
9. The data required to reproduce a similar study for Quebec and for Montreal are not available.​