16. Was the Kyoto Protocol a success or a failure?

The fact that an agreement involving a large number of parties with diverging interests was concluded at all is itself a success—even more so given that the overall reduction target was respected.(33)

However, the impact on total emissions and temperature, which was the ultimate goal, was marginal. Global CO2 emissions from the consumption of fossil fuels were 53% higher in 2012 than they were in 1990.(34) In the hypothetical situation in which all countries had adopted the Kyoto Protocol, it is estimated that the increase in atmospheric temperature would have been just 0.004°C lower by the end of the 21st century.(35)

The Kyoto Protocol required efforts from industrialized countries only, even though emerging and developing countries are responsible for a growing share of emissions. Non-OECD members were responsible for just 46% of emissions in 1990, compared to a projected share of nearly 70% in 2040 (see Figure 1-12). Furthermore, the United States, the biggest emitter through to the middle of the 2000s, did not ratify the Protocol. For its part, Canada officially withdrew from the Protocol in 2012.(36)

Given that the Kyoto Protocol’s objective was reducing overall emissions, these factors substantially qualify its merits. 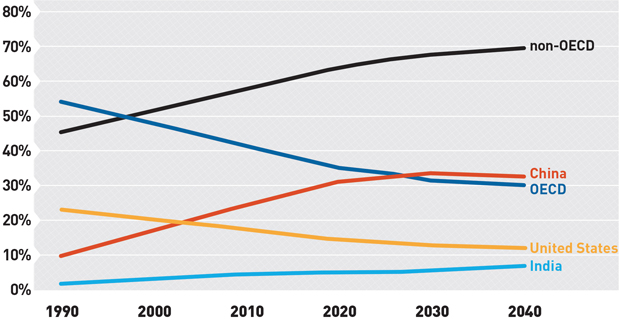 Note: In the absence of compatible data for the year 2000, we extrapolated a linear trend to complete the series.
Source: U.S. Energy Information Administration, International Energy Outlook 2013: With Projections to 2040, July 2013, p. 162.

Notes
33. In order to evaluate the effectiveness of the Kyoto Protocol in real terms, it would be necessary to determine if it led to the meeting of the targets, or if these would have been met anyway without an agreement. Among other things, one would have to take into account the impact of the 2008-09 economic crisis and the collapse of the Eastern Bloc.
34. BP, Data workbook – Statistical Review 2015, Carbon Dioxide Emissions (from 1965), June 2015.
35. Bjørn Lomborg, “Examining the Threats Posed by Climate Change: The Effects of Unchecked Climate Change on Communities and the Economy,” The Senate EPW Committee, Subcommittee on Clean Air and Nuclear Safety, July 29, 2014, p. 15.
36. United Nations, “C.N.796.2011.TREATIES-1 (Depositary Notification), Canada: Withdrawal,” December 16, 2011.