The public debate on budget austerity is very far removed from the way this concept is defined and studied in economics. The term “austerity” is most often used to refer to an amalgam of budgetary and tax measures aiming to balance the budget, without differentiating between these measures and their varied effects. This Economic Note provides an overview of the contributions of academic research regarding the effectiveness of different ways of balancing the budget. As we shall see, these distinctions are crucial, since the effects of public spending cuts and of tax hikes are diametrically opposed.

The public debate on budget austerity is very far removed from the way this concept is defined and studied in economics. The term “austerity” is most often used to refer to an amalgam of budgetary and tax measures aiming to balance the budget, without differentiating between these measures and their varied effects.

This Economic Note provides an overview of the contributions of academic research regarding the effectiveness of different ways of balancing the budget. As we shall see, these distinctions are crucial, since the effects of public spending cuts and of tax hikes are diametrically opposed.

The Effects of Reducing Public Spending

When discussing austerity, many commentators have the traditional Keynesian reflex of declaring that reducing public spending necessarily leads to slower economic growth. This notion is contrary to the results of the latest academic work in the field of economics. This research shows that lowering public spending as a proportion of GDP(1) is less likely to provoke a recession than raising taxes, and that it actually has a positive impact on growth.(2)

This phenomenon can be explained by the more efficient allocation of resources. When the government reduces its spending, it competes less with the private sector in attracting workers and capital. As a result, the private sector has more resources with which to expand its activities, and these resources are more affordable. Independent academic studies published in the most prestigious academic journals confirm that a reduction in public spending entails an increase in private investment.(3)

In the short term, public spending cuts have a modest negative effect on economic activity, since there is a short delay before private spending can take up the slack.(4) Such cuts, however, can also lead to rapid reductions in interest rates on the public debt, and can help make certain structural reforms more palatable to social partners by signalling that the government is serious.(5) After a year, the negative effects disappear.(6) Over the longer term, the positive effects of public spending cuts become overwhelmingly dominant, leading to an acceleration of economic growth.(7) According to the research, these gains are even greater if spending cuts are accompanied by a process of deregulation and a liberalization of the labour market.(8)

The Effects of Increasing Taxes

The response to these arguments most commonly heard and read in the public discourse is that it would be preferable to balance the budget by increasing taxes. And yet, a universal result in economics, found in all introductory textbooks, is that collecting a dollar of income or other taxes, as a general rule, costs society more than a dollar. Raising taxes has the effect of creating distortions in the private sector of the economy, reducing purchasing power and discouraging productive activities. This is called the deadweight loss of taxation, which is to say that above a certain level, increasing taxes entails a loss of economic well-being that is larger than the growth of well-being funded by the government’s additional revenues.

Recent studies estimate that every dollar collected costs society from $1.10 to $5.00.(9) Furthermore, these are costs that are repeated each fiscal year, and that have a tendency to increase over time.(10) Since tax increases lead to slower economic growth, and can even provoke recessions,(11) they have a tendency to deepen budgetary holes instead of filling them.

The public debate is also silent on the topic of the sustainability of the gains associated with these two different ways of balancing the budget. Yet once again, they are not equivalent. The research shows that spending cuts allow governments to maintain budgetary balance longer than tax hikes.(12)

These results are at the cutting edge of economic research, and are confirmed as much by economists who are more in favour of government intervention as by others who advocate greater reliance on market mechanisms. The current debate in economics is no longer about the existence of these effects, but only about their magnitude.(13)

The Experiences of OECD Countries

Since the 2008-2009 recession, the majority of OECD countries have reduced their deficits relative to GDP. On average, this ratio fell by 2.8 percentage points over 4 years, going from 6.2% of GDP in 2009 to 3.4% in 2013.(14) Taken globally, the reduction of deficits in these countries is equally attributable to spending cuts and to increased revenues. However, the paths chosen by the governments of these countries to reduce their deficits vary considerably. Three combinations of measures are possible:

These varied experiences allow us to distinguish the effects, in terms of economic growth, of reductions or increases in spending and taxes (see Figure 1). 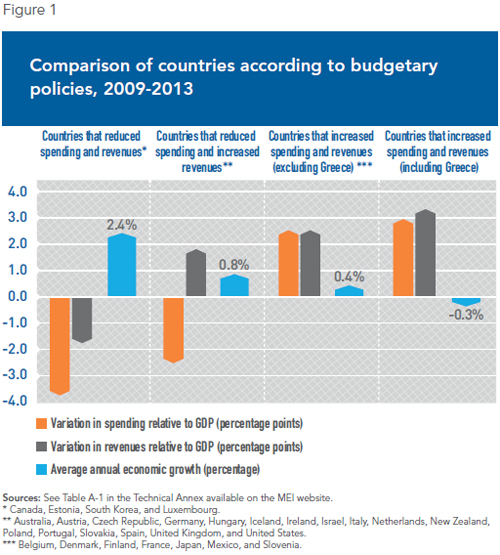 Canada, South Korea, Estonia, and Luxembourg served as models by reducing both their spending and their revenues (the former more than the latter, which allowed them to reduce their average deficit relative to GDP). The combination of two measures with positive effects allowed them to achieve an enviable average annual growth rate of 2.4%.

Public spending at all levels of government in Canada relative to GDP fell by 3 percentage points during this period, reaching 40.7% in 2013. Revenues fell by 1.2 percentage points, to reach 38% of GDP. The Canadian economy quickly achieved growth that was more than double the average of the countries studied.

At the other extreme, some countries decided instead to increase both their spending and their tax burdens. This group of countries includes, among others, Greece. The total reduction of the Greek deficit between 2009 and 2013 is due to a 9 percentage point increase in government revenues relative to GDP, while spending relative to GDP increased by 6 percentage points. France, to a lesser extent, opted for a similar solution by increasing its spending and its taxes. This group of countries experienced average annual growth of just 0.4% (and by including the extreme case of Greece, we even observe an economic contraction averaging 0.3% annually). The efforts of countries that increased their revenues and their spending were in many cases counterproductive, since their average deficits relative to GDP did not in the end decrease during the period of budgetary rigour.

Halfway between these two extremes, certain countries adopted one good and one bad measure, which is to say that between 2009 and 2013, they reduced their spending while increasing their revenues. Their average annual growth of 0.8% is also in between the growth experienced by the other two groups.

Another way of measuring the effects of the different budgetary and tax measures is to analyze the case of countries whose governments concentrated 75% of their efforts on balancing the budget with spending cuts, and those that concentrated 75% of their efforts on increasing revenues. The first group averaged annual growth of 1.3%, whereas the economies of the second group instead experienced contractions of 0.4% per year.(16)

These experiences provide a good illustration of the conclusions of the recent work in economics, and run counter to the explanations put forth by those who oppose measures to reduce public spending and who propose increasing the tax burden in order to balance the budget.

What about Austerity in Quebec?

The province of Quebec experienced a very modest adjustment compared to other OECD economies over this same period. In 2013, the Quebec deficit relative to GDP had decreased by 0.3 percentage points since 2009, versus an average of 2.8 in the OECD. Table 1 summarizes the effects of these efforts to return to budgetary balance. 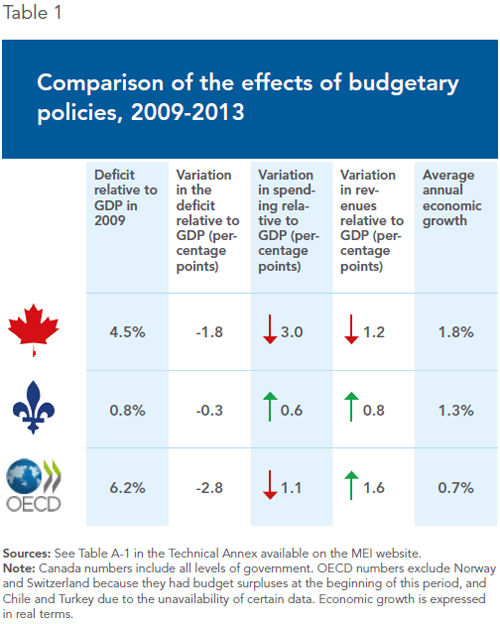 One of the reasons for the modest level of this adjustment is that Quebec did not experience any spectacular increase in its deficit during the 2008-2009 crisis, contrary to the majority of industrialized countries. In 2009, Quebec registered a deficit of 0.8% of GDP, versus an average of 6.2% in OECD countries that ran deficits, and versus 15.3% in Greece.

The deficit reduction measures the Quebec government did adopt, though, were the kinds that deliver the least impressive results. Revenues increased by 0.8 percentage points and spending by 0.6 percentage points. Quebec did succeed, however, in preserving growth of around 1.3%, which is undoubtedly due both to the limited magnitude of these adjustments relative to GDP and to the fact that during this same period, Canada as a whole carried out the opposite adjustment strategy by lowering both spending and revenues.

Certain commentators claim that since the 2014 election, Quebec’s new government has begun an austerity program that is “among the most intense of all industrialized countries,”(17) and that this is a threat to economic growth. For one thing, such concerns invariably lump together spending cuts and tax hikes, measures which we’ve seen have very different effects on growth. And judging from the international data surveyed above, a combination of spending cuts and tax hikes should actually promote economic growth—though admittedly not as much as simultaneous cuts to spending and taxes.

The public debate over reducing the deficit must do a better job of distinguishing between efforts based on reducing spending and those based on raising taxes. As the most up-to-date economic literature shows, the effects of these two approaches are diametrically opposed. A better understanding of these effects would lead governments to adopt economic policies that are more effective and more conducive to ensuring long-term prosperity.

This Economic Note was prepared by Mathieu Bédard, Economist at the MEI. He holds a PhD in economics from Aix-Marseille University, and a master’s degree in economic analysis of institutions from Paul Cézanne University. Vincent Geloso and Youcef Msaid are Associate Researchers at the MEI.