With rising life expectancy, saving for retirement is becoming increasingly important. Government programs like RRSPs and TFSAs encourage Canadians to save by allowing them to shelter certain portions of their incomes from taxation. Governments undermine this objective, though, by excessively inflating mutual fund management fees with sales taxes.

With rising life expectancy, saving for retirement is becoming increasingly important. Government programs like RRSPs and TFSAs encourage Canadians to save by allowing them to shelter certain portions of their incomes from taxation. Governments undermine this objective, though, by excessively inflating mutual fund management fees with sales taxes.

The savings that Canadians place in mutual funds, which account for 27.2% of their financial investments,(1) are taxed unfairly compared to other investment products. Whereas the share of sales taxes embedded into their management fees is around 8.2%,(2) Canadians only pay between 1% and 3% in embedded sales taxes for a guaranteed investment certificate(3) and 0% when they directly purchase securities like stocks and bonds.(4)

Moreover, the sales tax levied on mutual funds does not reflect the rates in effect in each province, but rather an average of the sales taxes applied in the different provinces, weighted according to the proportions of a fund’s shareholders in each province. Concretely, this means that through their mutual funds, shareholders in the four Western provinces and the three territories pay provincial taxes to the Atlantic provinces, Quebec, and Ontario.(5)

There are two reasons for this different treatment. First, since mutual funds are trust companies,(6) all hours of labour devoted to them, like all operating and management expenses, are subject to the GST, and to provincial taxes where these are harmonized. This is not the case for practically any other retirement savings product. In addition, mutual funds cannot be reimbursed for the GST and provincial taxes they have paid, as businesses generally are. These taxes therefore inflate management fees and reduce returns on investments. 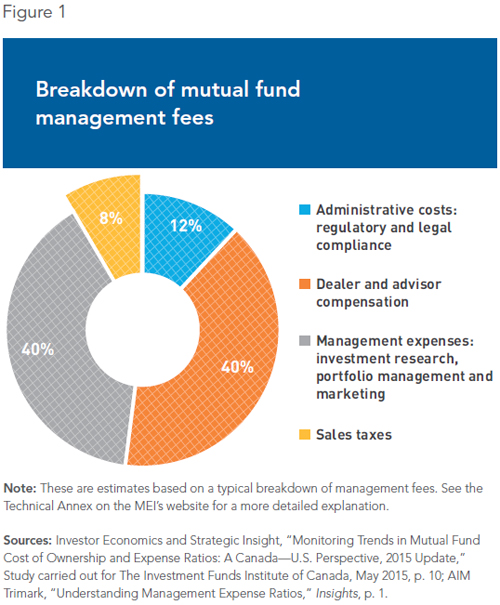 The only other comparable savings products are pension funds, since they are also trust companies. But contrary to mutual funds, these can be reimbursed for 33% of sales taxes paid.(7)

In 1990, the year before the GST was implemented, Canadians’ mutual fund assets amounted to some $25 billion, whereas today they represent $855 billion.(8) The problem was therefore less pressing at the time than it is now. This situation was made worse by the harmonization of federal and provincial sales taxes from 2006 to 2013,(9) with the authorities paying no heed to the effects on Canadians’ investments.

The Effect on Retirement Preparedness

Under the same assumptions, regardless of the amount invested, it will take 5 extra months to reach an investment objective that would have taken 25 years without taxes, 6 extra months for an objective that would have taken 30 years, and 9 months longer to reach a 40-year objective.(11) To make up for this shortfall, an investor therefore either has to contribute more, or make do with less, or delay his or her retirement.

Mutual funds, of course, remain an attractive form of investment. For one thing, they are a way to delegate the management of one’s portfolio to an expert. For another, they allow one to pool one’s investments with those of many other investors and thereby to enjoy the benefits associated with a large portfolio.

However, successive reforms of Canadian sales taxes have created a particular situation that imposes a much heavier tax burden on mutual funds than on other investment vehicles, which has the effect of slowing down Canadians’ retirement preparations.

This situation could be addressed by, for instance, applying the same rules that are applied to pension funds, namely a reimbursement equivalent to 33% of sales taxes paid. Another solution would be to replace sales taxes with a more equitable compensatory tax, as was the case with the Quebec sales tax before the harmonization of Canadian sales taxes. Alternatively, we could generalize the situation in effect in those provinces not participating in the harmonized sales tax, and decide not to subject mutual funds to provincial sales taxes at all.

The implementation of one or another of these reforms would put an end to a disadvantageous situation that exists for no good reason—especially in a context in which governments want to encourage retirement savings.

This Viewpoint was prepared by Mathieu Bédard, Economist at the MEI. He holds a PhD in economics from Aix-Marseille University, and a master’s degree in economic analysis of institutions from Paul Cézanne University.

1. Investor Economics and Strategic Insight, “Monitoring Trends in Mutual Fund Cost of Ownership and Expense Ratios: A Canada—U.S. Perspective, 2015 Update,” Study carried out for The Investment Funds Institute of Canada, May 2015, p. 13.
2. The sales taxes applied by the Canada Revenue Agency are an average of the sales taxes in effect in the different provinces, weighted according to the proportions of a fund’s shareholders in each province. We use the estimate provided by Investor Economics and Strategic Insight, Ibid., p. 10.
3. This is a hypothesis based on input costs equivalent to 20% of total management fees paid by the bank that issues the certificate. Since tax rates vary from one province to another, the share of embedded sales taxes is not the same in all provinces. According to this hypothesis, this share is therefore 2.995% in Quebec, 2.6% in Ontario, 3% in Nova Scotia, and 1% for a bank whose activities are concentrated in Alberta. Canada Revenue Agency, GST/HST rates, November 7, 2014; Revenu Québec, Collecting GST and QST, Calculating the Taxes. See the Technical Annex on the MEI’s website for a more detailed explanation.
4. Since businesses are reimbursed for GST and provincial sales taxes.
5. In the seven provinces and territories where sales taxes are not harmonized, only the GST (5%) is applicable. In the other provinces, the rate is equal to the sum of the GST and the provincial sales tax. For a detailed explanation of this problem, see Red Deer Chamber of Commerce, “Exempt Alberta from Paying HST,” Policy, 2014.
6. “A trust company is a financial institution that operates under either provincial or federal legislation and conducts activities similar to those of a bank. However, because of its fiduciary role, a trust company can administer estates, trusts, pension plans and agency contracts, which banks are not permitted to administer.” Office of the Superintendent of Financial Institutions, Who We Regulate, October 23, 2014.
7. Canada Revenue Agency, The GST/HST Rebate for Pension Entities, October 8, 2010, pp. 6-7.
8. Autorité des marchés financiers, “Les organismes de placements collectifs,” 2006, p. 4; Institut de la statistique du Québec, “Fonds communs de placement au Québec : Premier trimestre 2015,” June 2015, p. 1.
9. Prior to this, mutual funds could be reimbursed in part or in whole for the provincial sales tax, like most companies. However, they have never been reimbursed for the GST, unlike other companies. KPMG, “Conseils fiscaux Canada,” Bulletin, August 14, 2012.
10. Author’s calculations. See the Technical Annex on the MEI’s website for a more detailed explanation.
11. Idem.​