While Quebec’s public health care system struggles to respond adequately to the needs of patients, and the cost of the system continues to rise rapidly, expanding the role of pharmacists in offering front-line services is without a doubt a step in the right direction. These increased responsibilities are likely to improve patients’ access to care and lead to savings, which the public system desperately needs.

Media release : A greater role for pharmacists to reduce health care wait times: The reform does not go far enough

Improving Access to Care by Expanding the Role of Pharmacists

In December 2011, the Quebec government adopted Bill 41 for the purpose of expanding the scope of practice for pharmacists and thereby improving patients’ access to care. In principle, the legislative change authorized pharmacists to offer seven new pharmaceutical services, including renewing or adjusting prescriptions, substituting drugs in cases of supply shortages, and prescribing drugs for minor ailments when no diagnosis is required. Implementation of the reform has been delayed, however, and these new consultations are still not on offer, due to the stalled negotiations between the government and the Association québécoise des pharmaciens propriétaires regarding their remuneration.(1)​

While Quebec’s public health care system struggles to respond adequately to the needs of patients, and the cost of the system continues to rise rapidly, expanding the role of pharmacists in offering front-line services is without a doubt a step in the right direction. These increased responsibilities are likely to improve patients’ access to care and lead to savings, which the public system desperately needs.

Accessing Care Remains as Difficult as Ever

The difficulty of accessing front-line care is the Achilles heel of the Quebec health care system. Despite the ever-increasing resources devoted to it for the past twenty-five years, wait times for required care remain as much of a concern as ever. Among all the provinces, it is in Quebec that we find the longest delays before receiving an appointment with a primary care physician.(2)

According to survey data from the Health and Welfare Commissioner, just 22% of general practitioners report that most of their patients can get an appointment the same day or the following day when they need one. In comparison, that figure is 59% for Ontario doctors, and over 75% for doctors in many other countries in Europe and elsewhere(3) (see Figure 1). This situation is all the more worrisome given that Quebec has 15% more family doctors than Ontario does as a proportion of population.(4) 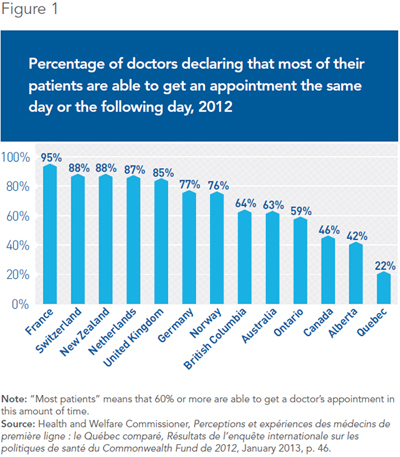 When it comes to accessing medical services evenings and weekends, the situation in Quebec is hardly any more encouraging. Over 60% of Quebec patients believe that it is “somewhat difficult” or “very difficult” to have access to medical care outside of normal office hours.(5) Short on options, many patients have no choice but to visit a hospital emergency room. In 2012-2013, emergency room overcrowding had gotten so bad that the average wait time was 9 hours, nearly two hours longer than it was a decade ago.(6)

These access difficulties stem in large part from the inability of a sizable portion of the Quebec population to find a family doctor. In 2013, nearly one in four Quebec adults still had no regular doctor, the highest proportion in the country.(7)

The Benefits of Turning to Pharmacists

At the moment, a high percentage of Quebec patients visit hospital emergency rooms or consult general practitioners in doctors’ offices or clinics for benign health problems requiring relatively simple medical interventions. According to a recent report from the Health and Welfare Commissioner, over 60% of hospital emergency room visits are for minor health conditions that could be better treated elsewhere.(8) Needless to say, these visits monopolize substantial amounts of medical resources and a non-negligible portion of doctors’ time.

As they are far more accessible evenings and weekends than doctors, pharmacists are ideally positioned to take care of many patients grappling with minor ailments. By turning to pharmacists for help, many patients will avoid the long wait times to see a doctor in the public system and will enjoy faster access to the care they need. Entrusting pharmacists with more responsibilities is also likely to reduce current demands on other, more expensive health care resources such as doctors and hospital emergency rooms. This will allow doctors to devote more time to cases that are more urgent or complex, entailing a more efficient use of resources and of public funds.

Internationally, pharmacists are increasingly integrated into front-line services and collaborate with doctors and other health professionals in order to improve the efficiency of the health care system and access to care. In the United Kingdom, New Zealand, and the United States, among others, the authorization to prescribe drugs and to renew prescriptions has been in effect for several years.(9) The resulting benefits are well documented.

In England, pharmacists have had greater authority to offer pharmaceutical services since 2005, including that of prescribing drugs in certain circumstances. In recent years, many pharmacies have implemented a variety of programs to take charge of minor ailments. According to a recent evaluation, these new services offered by pharmacists have freed up working hours for many general practitioners and generated savings of around 23 million Canadian dollars a year for the country as a whole. The majority of patients (58.1%) would have consulted their family doctor if the service had not been offered by pharmacists, which would in all likelihood have resulted in extra costs for the health care system.(10) In addition to these savings, however, it is reasonable to think that the most important benefits accrue to patients themselves, who have faster access to the care they need.

Several countries have also created programs designed to delegate responsibilities to pharmacists when it comes to following patients suffering from chronic diseases.(11) Giving pharmacists a greater role to play in reviewing and managing medications has led to improved treatment adherence and to reduced health risks and avoidable hospital admissions. These services have brought substantial benefits for patients suffering from chronic diseases like hypertension, asthma, and diabetes.(12)

In Canada, it is estimated that over two million people suffer from poorly controlled hypertension. Setting up a program to manage hypertension in community pharmacies would not only lead to lower blood pressure levels for many patients, but would likely generate substantial savings for the public health care system. The potential savings are evaluated at $70 million for Canada as a whole, even if only one in four patients benefits from the program.(13)

A Greater Role for Pharmacists in the Other Provinces

Conscious of the benefits that the services of pharmacists can bring in terms of improving access to front-line care, the governments of several provinces have started in recent years to delegate certain tasks that were traditionally the responsibility of doctors. Pharmacists are increasingly being allowed to prescribe drugs to treat minor conditions, to renew prescriptions, and to set up vaccination clinics, among other services (see Table 1). 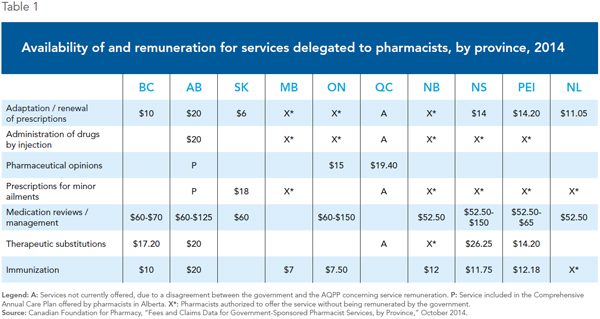 In 2007, Alberta became the first province to allow pharmacists to prescribe drugs for the treatment of minor ailments. Several provinces have since followed suit, including Saskatchewan, Manitoba and the Atlantic provinces. Since February 2012, pharmacists in Saskatchewan are remunerated for the prescription of drugs to treat various health conditions not requiring a doctor’s diagnosis. A recent evaluation found a very high level of customer satisfaction, both in terms of improving health and in terms of the quality of the services delivered by the pharmacist. Only 5.6% of patients said that a doctor would have been better able to provide this service.(14)

In every province except for Quebec and Manitoba, pharmacists also offer medication review and management services, which are covered publicly. The fees paid to pharmacists vary from one province to the next according to the scope of services provided and the kinds of diseases patients are suffering from.

In Ontario, the MedsCheck program has since 2007 offered certain patients suffering from a chronic disease the possibility of obtaining a complete individual consultation with a pharmacist once a year in order to optimize the effectiveness of their medication and encourage adherence. The government pays the pharmacist’s fee, which varies between $60 for a basic review in pharmacy and $150 for such a service provided in the home.(15) Given the program’s success and popularity, the Ontario government decided to expand it in 2010 in order to make it accessible to a larger number of patients.(16)

For a few years now, the governments of seven provinces have also remunerated pharmacists for administering vaccines to prevent certain infectious diseases, including the seasonal flu.(17) These provinces all have higher influenza immunization rates than Quebec, where less than a quarter of the population receives the vaccine.(18) In Ontario, the program set up in 2012 quickly enjoyed substantial support from the population. In 2013-2014, over 765,000 Ontarians received the flu vaccine in a pharmacy.(19) When surveyed, 99% of Ontario patients report that they would recommend pharmacist vaccination to their friends and family members.(20)

At the moment, even taking into account the prospective implementation of the reform authorizing pharmacists to provide new professional services, Quebec still trails the other Canadian provinces. Additional responsibilities could be entrusted to pharmacists, as has been done in these other provinces, notably Alberta and Ontario.

Pharmacists are the health professionals that are most accessible to the population.(21) The scientific literature leaves little doubt about the benefits that can result from expanding their role within the health care system. Several studies confirm that the implementation of reforms entrusting pharmacists with greater responsibilities in other countries has helped improve patient access to care and the quality of that care, all while lightening the load for the public health care system.

While the forthcoming implementation of the reform will be welcome, the government’s decision not to remunerate some of the newly authorized professional services and to forbid pharmacists from charging a fee for these services runs the risk of discouraging pharmacists from providing them. By proceeding in this manner, the reform could fail to achieve its main objective, which is to improve patients’ access to care.