Quebec is blessed in terms of the energy resources available on its territory. Most obviously, there is the province’s vast hydroelectric capacity, which produces 96% of its electricity. This month, the government made public a series of reports suggesting that it might soon be ready to move forward and allow oil development in the province. In light of this news, it is worth reconsidering some of Quebec’s energy choices to see which kinds of policies might enrich, rather than impoverish, Quebec taxpayers.

Quebec is blessed in terms of the energy resources available on its territory. Most obviously, there is the province’s vast hydroelectric capacity, which produces 96% of its electricity.(1) Yet in recent years, successive Quebec governments have adopted policies to subsidize “green” energy projects and initiatives that are far less cost-effective than hydropower. At the same time, efforts to develop the province’s potentially substantial oil reserves have encountered regulatory hurdles and delays, as well as opposition from activist groups.​

This month, however, the government made public a series of reports suggesting that it might soon be ready to move forward and allow oil development in the province.(2) In light of this news, it is worth reconsidering some of Quebec’s energy choices to see which kinds of policies might enrich, rather than impoverish, Quebec taxpayers.

The Costs of Subsidizing “Green” Energy

One green energy program Quebecers have been subsidizing for over a decade involves harnessing wind power. Producing electricity using wind turbines, however, is much more expensive than producing it using hydroelectric dams. In fact, the average cost of electricity produced from wind power exceeds the average price at which Hydro-Québec sells its electricity.

The electricity produced by this sector is therefore implicitly subsidized. In 2013, the MEI calculated that Hydro-Québec indirectly subsidizes the wind power sector to the tune of $695 million a year.(3) This amounts to some $200 per Quebec household every year to produce a tiny fraction of the province’s energy from wind turbines.(4)

Subsidizing the purchase of electric cars is another way in which the Quebec government promotes green energy.(5) Quebec’s plan for the electrification of personal transportation is the most ambitious in Canada, offering a subsidy of up to $8,000 toward the purchase of an all-electric or plug-in hybrid vehicle and up to $1,000 for the purchase and installation of a 240-volt charging station at your home.(6)

With 2,684 new plug-in vehicles(7) sold in Quebec in 2014, the cost of this program for the government comes in at approximately $22 million a year.(8) This cost will likely increase given that yearly sales are on an upward trajectory that seems likely to continue. Also—and despite this upward trajectory—in order to encourage more than a fraction of a percent of drivers to purchase plug-in vehicles, the effective subsidy per vehicle would have to be much higher than it currently is.(9)

In contrast, oil development projects do not have to be subsidized; they need only be allowed. Even though oil prices have fallen in recent months, private companies remain interested in developing Quebec’s oil resources in places like the Gaspé region and Anticosti Island—and such projects also remain attractive from a public treasury perspective.

In the Gaspé region, Junex Inc. recently produced 2,723 barrels of light, sweet crude oil over a five-day period, raising the prospect of commercial oil production as early as 2016.(10) With production costs at around $20 per barrel,(11) the undertaking remains viable even with the price of crude oil hovering at around $50 a barrel, as it has so far in 2015.(12)

But it is Anticosti Island that holds the greatest promise. According to evaluations by developers Pétrolia and Junex, there are more than 40 billion barrels of oil on the island.(13) Even at $50 a barrel, and assuming that just 3% of these reserves are recoverable, developing this resource would pump around $160 million a year into the Quebec treasury over a 30-year period. At $75 a barrel, that figure jumps to $978 million a year.(14)

Instead of subsidizing wind power and electric cars and being in the red, the government could be in the black by allowing oil development on Anticosti Island. The savings in terms of abolished subsidies ($695 million + $22 million) combined with the likely royalties from new oil development ($978 million) would total some $1.7 billion a year for the Quebec government (see Figure 1). 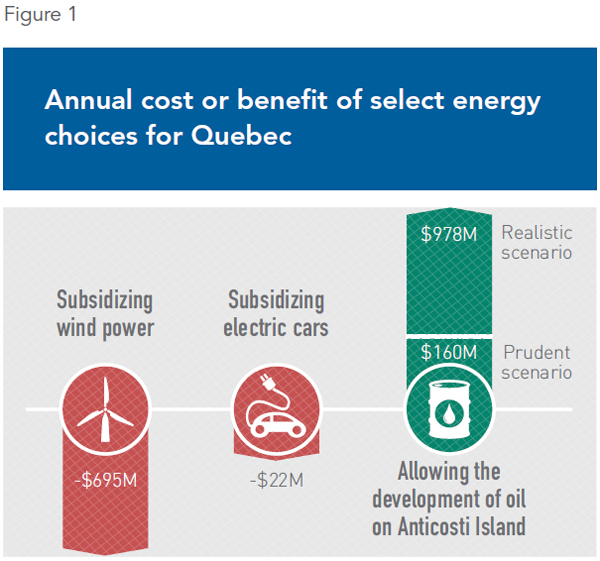 Oil is an indispensable energy source for a modern economy. It is the main source of energy used in Canada, meeting 39% of total energy needs.(15) Its energy density makes it a preferred source of energy in the transportation sector, its molecular composition makes petroleum by-products very useful for the petrochemical industry, and of course, it remains affordable.

Wind farms and electric cars, however, are not cost-effective at the moment, which is why they still depend on subsidies. Some argue that such programs create jobs, but the money that government spends on them, if left in private hands, would create around three times as many jobs.(16)

As long as oil remains more affordable than renewables and continues to provide us with essential products and services, its use may decline somewhat, but it will remain a favoured source of energy in Quebec and elsewhere. Since we appear to have exploitable oil resources in this province, we too can benefit from the wealth creation that accompanies this activity.

Viewpoint prepared by Youri Chassin, Economist and Research Director at the MEI (he holds a master’s degree in economics from Université de Montréal), and Bradley Doucet, Editor and Policy Analyst at the MEI.