There are still some people, including government officials, who look at any job which is not full-time and permanent as a non-standard or undesirable job. But these people should know that "non-standard jobs" are actually more numerous in Canada than the standard ones.

This change has happened mostly because it is a desired phenomenon. Indeed, many people yearn for such jobs because they want to balance work with family obligations, with the pursuit of their studies or with gradual retirement. In fact, three quarters of people in such "non-standard" jobs are choosing this course.

When they answer people's needs, there is no way that we can characterize these changes as "undesirable". On the contrary, the flexibility now offered by the labour market is a good thing.

Adapting and evolving are central aspects of the concept of flexibility. More flexibility does have the effect of increasing uncertainty for both employers and employees. But rigid labour market rules and regulations are not a solution since they generate structural unemployment. In Europe, where the regulation of labour market is very heavy, we see that unemployment rates have been higher than in United States or Canada. The scale of unemployment among the youth and immigrants is alarming in several countries.

The reason for this can be grasped very easily from the point of view of an employer: if hiring someone ties your hands for the future, it creates a risk for your business, and the decision to hire won't be easy of frequent. Hiring and laying off employees are two intimately connected decisions and both are necessary to adjust to an ever-evolving economy. So regulations should preserve flexibility. 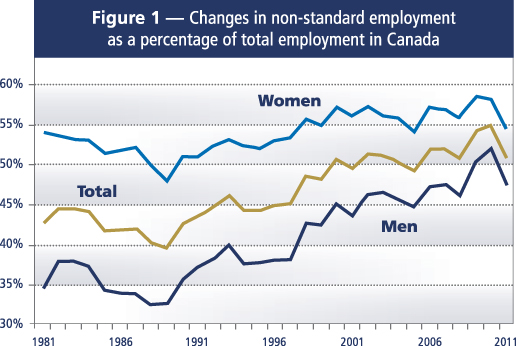 Staffing services on the rise

Change in the labour market goes hand in hand with the continuous rise of staffing services. In Canada, this industry's operating revenues have gone up considerably in the last dozen years, reaching $10.6 billion. So have salaries, wages and benefits paid by staffing services.

This raises a tough but legitimate question: are businesses using staffing services to subcontract jobs and pay lower wages? When asked about their motivations, American businesses cite these various reasons: to deal with unexpected business growth (52 per cent); to fill long-term absences (47 per cent); while waiting for permanent replacement (47 per cent); for special projects (36 per cent). Also, 21 per cent use staffing services in order to pre-select candidates for regular positions. No mention of lowering wages here.

A German study went a bit further by examining the behavior of companies making extensive use of staffing services, meaning that they find more than 20% of their labor force that way. The conclusion of the authors is that they do so only temporarily, making it unlikely to be part of a low labour cost strategy.

A springboard for the unemployed

One of the least-known facts about staffing services, that we see confirmed in various studies, is the "springboard effect" for the unemployed.

In the U.S., the overall impact of staffing services was quite impressive after the last recession. Even though they account for only 2 per cent of total employment, the industry was responsible for 12 per cent of net job creation over the past three years.

In Canada, 60 per cent of previously unemployed people who found a job were hired for "non-standard" work. Compared to staying unemployed, working for an agency increases the probability of finding a job, and also the prospective salary, as shown in a Dutch study. This positive causal effect was also raised in an Italian study.

In other words, some people chose to work part-time or temporary contracts. But even for those looking for a full-time and permanent job, staffing services offer a leg up.

It is especially true for immigrants, the reason being that when they graduated or were trained abroad, they have a harder time convincing future employers of their skills. Staffing services provide an opportunity to be evaluated on the job.

All in all, there are no real downsides about having a more flexible labour market. It gives everyone the opportunity to achieve what they want. And the possibilities abound.