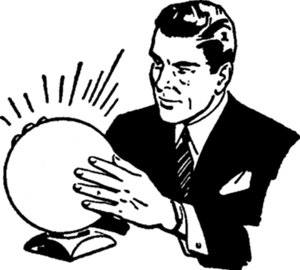 Attempting to predict the future is part of human nature. There are a great many merchants of doom who evoke cataclysms, chaos and other forms of calamity. But do these predictions stand up to the facts? Here are a few examples of predictions showing the need for scepticism in the face of prophecies from certain experts.

1. "Almost unanimous" on reduced agricultural output in the 20th century

PREDICTION: "There are ominous signs that the Earth’s weather patterns have begun to change dramatically and that these changes may portend a drastic decline in food production – with serious political implications for just about every nation on Earth. The drop in food output could begin quite soon, perhaps only 10 years from now. […] Meteorologists disagree about the cause and extent of the cooling trend, as well as over its specific impact on local weather conditions. But they are almost unanimous in the view that the trend will reduce agricultural productivity for the rest of the century."

WRONG: The United Nations Food and Agriculture Organization (FAO) calculates that world food production per capita increased by 28% between 1975 and 2009 and that the percentage of undernourished persons in the world has dropped from 26% in 1979-1981 to 13% in 2005-2007. The only exceptions are found in some African regions, but undernourishment statistics are down for the continent as a whole. In the US, between 1981 and 2004, labour productivity in agriculture has increased by 3.7% per year.

PREDICTION: "Unless something is done to reverse environmental deterioration, say many qualified experts, horrors lie in wait. Others disagree, but scientists have solid experimental and theoretical evidence to support each of the following predictions: In a decade, urban dwellers will have to wear gas masks to survive air pollution […]"

PREDICTION: "The Liberal government has no sensitivity toward people’s quality of life. This is a total change in society. With Bill 75, they sought to protect the interests of the big chain stores with the sole aim of making Quebec more commercial."

COMMENTARY: Not many people seem to have noticed "a total change in society" since Bill 75 came into force in 1990.

4. Amendment of Section 45 of the Labour Code in 2003: a "total change in society" and "a breakdown in labour peace"

PREDICTION: "Adoption of Bill 31 will lead to a deterioration of the labour climate in Quebec and a breakdown in labour peace. […] If the government maintains its intention and adopts the bill, Quebec will inevitably experience increased conflict. […] It will lead Quebec onto a path of confrontation between employers and unions."

– Michel Sawyer, general president of the Syndicat de la fonction publique du Québec, to the hearings of the National Assembly Committee on Labour and the Economy on Bill 31, November 26, 2003.

WRONG: From 2004 to 2009, after the bill was adopted, the average number of person-days lost annually due to work stoppages fell by 60% compared to the annual average between 1962 (after the adoption of Section 45) and 2003.