The Québec Parental Insurance Plan (QPIP) is a Quebec government program in effect since January 1, 2006 that pays benefits to workers when they become new parents.

The QPIP recorded a deficit of 180 million dollars in 2009[1]. This was the QPIP’s third consecutive deficit in its short history. Yet these results followed an 8% increase in premiums paid on January 1, 2008 and another 7.5% increase on January 1, 2009.

The QPIP replaced a federal program that existed for three decades and was financed out of employment insurance. The Conseil de gestion de l’assurance parentale, which had estimated that the initial cost of the plan would be 1,080 million dollars[2], expected that 70% of premiums paid by Quebec workers would be reimbursed to them through a rebate on their own employment insurance contributions. This has proved inaccurate, since in 2009, the value of the federal rebate only amounted to 53% of the total cost of 1,707 million dollars.

Following the rapidly rising costs and repeated deficits, some have suggested that the government should subsidize this program instead of increasing premiums yet again. Others believe the QPIP is too generous and that benefits should be revised downward. Before determining the best way to eliminate the deficit, let us first try to discover the factors responsible for this escalation of costs and these serial deficits.

The three principal factors responsible for the escalation of costs for Quebec taxpayers are:

– The increasing number of births;
– The transformation of Quebec’s labour market;
– The behaviour of fathers.

The increasing number of births

The number of births is also rising in the rest of Canada, but less rapidly, as can be seen from Table 1. 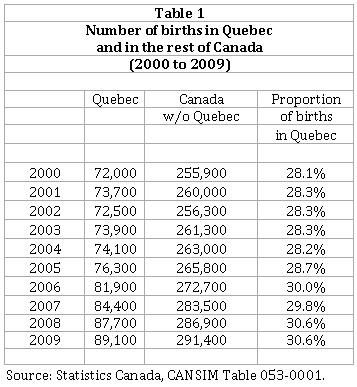 By consulting the fertility rate, we can affirm that as of the year 2006, there was a greater increase in births in Quebec than in the rest of Canada. Even if it had been rising as much in Canada as in Quebec since the year 2000 (see Table 2), Quebec’s rate has been growing more rapidly since 2005 and surpassed the Canadian rate as of 2006. 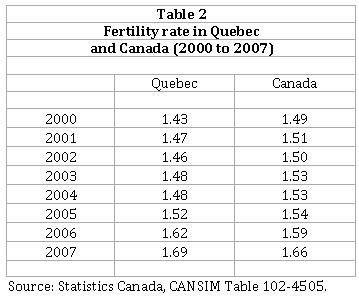 While Quebec births represented approximately 28.3% as many births as the rest of Canada from 2000 to 2005, this proportion reached 30.0% in 2006 and 30.6% in 2008 and 2009. If, after 2005, the proportion of Canadian births from Quebec had remained the same, Quebec couples would have had 6,200 more children in 2009 than in 2005. Since the actual increase in the number of births was 12,800 for this interval, there are 6,600 births that could very plausibly be attributed to the establishment of the QPIP. This represents a little more than half of the additional births registered since January 1, 2006.

The transformation of Quebec’s labour market

According to the Conseil de gestion de l’assurance parentale, one of the goals of the QPIP is to “promote the adaptation of the Quebec economy to the current realities of the labour market so as to relieve labour shortages.”[5] Is this goal being met?

For several years now, more and more Quebec women aged 25 to 54 are participating in the labour market[6]. As shown in Table 3, their employment rate (i.e., the proportion of these women who work full-time or part-time) went from 71.4% in 2000 to 78.7% in 2007. The employment rate has not budged since then, probably as a result of the financial crisis that shook the Quebec economy. 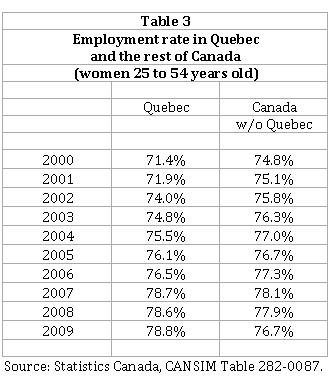 The growth in the employment rate was especially large in 2002 and in 2007. An increase of more than two percentage points was observed in 2002 after the budget for daycare services was doubled from 1999 to 2002 (see Table 4). As for the similarly large increase in 2007, it can plausibly be attributed to the establishment of the QPIP. These data suggest that the daycare services program and the QPIP both contributed to the rapid transformation of Quebec’s labour market. 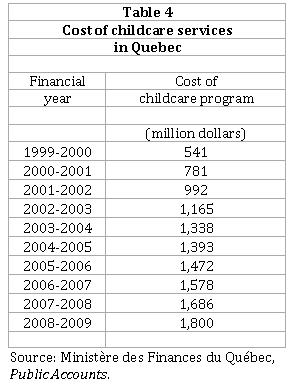 This increased activity is not unique to Quebec women since the employment rate of other Canadian women also increased during this same period, but at a pace three times slower. It went from 74.8% to 76.7% over the course of the last ten years. The employment rate of Quebec women aged 25 to 54 has been greater than that of other Canadian women in the same age group since 2007. This is a remarkable phenomenon since it is not what is observed when comparing the Quebec labour market with its counterpart in the rest of Canada. Only 59.6% of Quebec men were working in December 2009 compared to 61.9% of men in the rest of the country.

If the growth in the employment rate of Quebec women since the year 2000 had proceeded at the same pace as it did in the rest of Canada, 92,000 fewer Quebec women aged 25 to 54 would have been working in 2009. The combined incomes of those 92,000 women totalled something on the order of 3 billion dollars in 2009 alone[7].

The behaviour of fathers

The federal program, which applied to Quebec until December 31, 2005, pays out maternity benefits for 15 weeks and parental benefits for 35 weeks. These last can be shared between the mother and the father, at the parents’ discretion.

The Quebec plan also contains provisions allowing for the parental benefits to be shared between the two parents. In addition to this, however, it allows for three or five weeks of paternity benefits, depending on whether the special or the regular plan is chosen. Taking advantage of these benefits does not affect the duration of the parental benefits.

The popularity of paternity benefits far surpassed the expectations of the QPIP’s architects. They had anticipated paying out $55 million of paternity benefits during the plan’s first year. The number of fathers who took advantage of this innovation was much higher than expected since they spent $88 million on the new benefits in 2006 and $155 million in 2009[8].

Are we sure that the great popularity of paternity benefits represents, as some would have it, the willingness of Quebec men to better assume their familial responsibilities? Could it instead be the result of the generosity of the paternity benefits combined with the possibility of receiving these paternity benefits without reducing the number of weeks of parental benefits payable to the couple? Let us see if this is the case.

According to the data appearing in Table 5, Quebec men were already more inclined than other Canadian men to take advantage of parental benefits before the introduction of the QPIP: 9.5% of benefit weeks were paid to men in Quebec in 2001 versus only 5.7% in the rest of Canada. Year after year, in Quebec as in the rest of the country, a slow progression in the proportion of parental benefit weeks paid out to men can be observed. 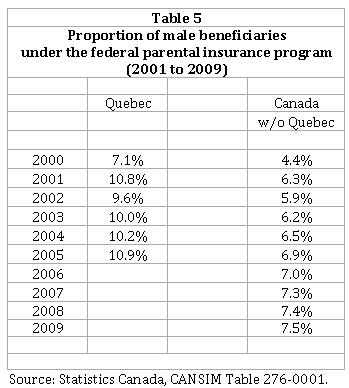 What happened with the establishment of the QPIP? The progression observed before 2006 seems to have continued since 12% of parental benefit weeks were paid out to Quebec men in 2008. If the province had remained on the federal plan, the number of Quebec men receiving parental benefits would likely have continued to rise, going from 10.9% in 2005 to around 12% in 2009.

According to this analysis, we cannot conclude that the enthusiasm shown by new fathers for claiming paternity benefits reveals a greater acceptance of their familial responsibilities. When they receive these benefits, the child’s mother is generally present with the newborn[13], which is not the case if they receive parental benefits instead of the child’s mother.

Quebec has established, in the last ten years, two programs to help families who want to have children while allowing both parents to pursue their careers in the labour market. These programs entail annual expenditures of 3.5 billion dollars. They do seem, however, to have contributed to an increase, above and beyond the Canadian average, in both Quebec’s very low birth rate and in the employment rate of Quebec women aged 25 to 54. This marked increase in the employment rate has a substantial economic impact on the Quebec economy since it contributes to the reduction of labour shortages.

This does not mean, though, that the QPIP is achieving all of its goals. Must we subscribe to the enthusiasm of the Conseil de gestion de l’assurance parentale, which declared in 2009 that “like fathers in Scandinavian countries, Quebec fathers demonstrate an interest in sharing familial responsibilities and childcare. The Plan is among those efforts that promote the adoption of egalitarian behaviours”[14]? The substantial expenditures incurred for paternity benefits had no significant impact on the willingness of fathers to assume a greater share of the responsibilities that a couple must shoulder with the birth of a child.

We could better measure the willingness of fathers to assume their familial responsibilities if they were not allowed to receive their paternity benefits while the mother is herself receiving benefits from the QPIP. In a society that leaves its sick to wait hours on end in emergency rooms due to lack of personnel, is it desirable for the government to pay out simultaneous benefits to two adults to ensure their presence for the care of a single child?

Following the rapid rise of costs and repeated deficits, must we subsidize this program instead of raising premiums once more? The government already funds the daycare program from general revenues. If we agree to pay out subsidies to the QPIP, how far will it go? Will we increase the subsidies each year since the level of benefits must be continually adjusted as a function of changes in the remuneration received by QPIP beneficiaries?

It would be better to fund this program with a special premium as it has been funded since the beginning, and as is done for the other social insurance programs.

We force employers to pay premiums equal to 1.4 times the premiums paid by their employees. This is the employment insurance formula. When funding unemployment benefits, this higher premium for the employer can be justified since the employer has a certain amount of control over layoffs. The same certainly cannot be said for parental insurance benefits. This is even more true given that the daycare service has contributed to an increase in the costs of the QPIP. It would be fairer for this plan to be funded equally by employees and their employers.

The Conseil de gestion de l’assurance parentale, which had estimated the initial cost of the QPIP at $1,080 million, expected that 70% of its funding would come from the employment insurance premium rebate following Quebec’s withdrawal from the federal program. This is off the mark in 2009 since the value of the federal rebate now amounts to just 53% of the QPIP’s total cost.

The architects of the QPIP had not taken into account the behavioural changes that might result from the plan itself. We have shown that fully half of the increase in births observed since 2005 in Quebec can plausibly be attributed to this new program. Moreover, its existence, combined with a continually expanding daycare service, led to a substantial increase in the employment rate of Quebec women of childbearing age.

The annual payment of $160 million in paternity benefits does not seem to have modified the behaviour of fathers in any significant way. There has certainly been, since 2005, a slight increase in the proportion of parental benefits they receive; but similar trends can be observed in the rest of Canada even though Canadian men outside the province of Quebec do not receive paternity benefits. The objectives of the QPIP might be better met if fathers wanting to take advantage of paternity benefits were required to be the only parent absent from the workforce at that time.

We must also adequately fund the QPIP to ensure its continued existence. As a social insurance program that pays compensation to couples who choose to have children, why should it not be financed equally by employers and their employees?

Claude A. Garcia is Associate Researcher at the Montreal Economic Institute.