In his inaugural address opening Quebec’s 37th legislature, newly elected Premier Jean Charest stated “We have reached the end of a certain way of doing things.” He said taxes must be lowered not just for the pleasure of it but “because it is necessary, because our tax load is an obstacle to our development.” Similarly, regulation must be lightened and simplified because “there exists a tangle that poisons life for entrepreneurs, serving the interests neither of citizens nor of business.”

What exactly is the weight of this tax and regulatory burden that people in Quebec are forced to bear? It may be useful to give an overview of this burden to be reminded of why Quebecers voted for change in last April’s elections.

On an overall basis, taking every tax into account, the average Quebec resident hands over more than 40% of what he or she earns to the tax collector. Federal taxes represent 40% of the tax burden, while provincial taxes account for 45% of Quebecers’ tax load. Local taxes (municipal and school), such as property tax or business taxes, weigh in at just under 10% of the total tax load. Quebec Pension Plan contributions are the last major factor.

Of the $43 billion collected annually in taxes of all sorts (including indirect taxes) by the Quebec administration, $17 billion comes from the province’s personal income tax. This income tax is higher in Quebec than anywhere else in Canada, except for people with very low incomes. Meanwhile, corporate income tax brings the Quebec government $2.5 billion a year.

Quebecers’ tax burden can also be measured by examining total revenues accruing to public administrations. As the graphic shows, the evolution of Quebecers’ total tax load is characterized by a continuous rise. The tax burden went from 38.7% of provincial gross domestic product in 1982 to 44.2% in 2000. 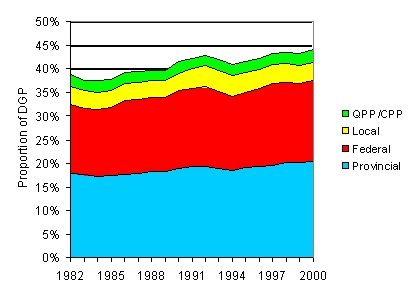 Taxes are not only high but complex as well. In its electronic version, the Quebec Taxation Act has 1,210 articles taking up 2,400 pages and amounting to 11 megabytes (or eight diskettes). On top of this are the Act Respecting Application of the Taxation Act, the Retail Sales Tax Act, the Tobacco Tax Act, the regulations pursuant to these acts, and other administrative texts.

Since one person’s taxes are someone else’s subsidies and income, evaluation of the economic cost of taxation – as opposed to the burden it creates solely for taxpayers – requires calculating the net loss engendered in national production because of disincentives to work. According to the 1984 White Paper on Personal Taxation, the dead loss from federal and provincial taxes is equivalent to between 15% and 35% of Quebec’s GDP. Another estimate suggests that each new dollar of income tax raised in Quebec at that time cost between 40 and 50 cents in lost economic efficiency.

Each year Quebec companies must meet 459 types of administrative formality consisting of requests for administrative authorization, registrations, and production of reports. These formalities are conducted more than 17 million times. Three-quarters are related to tax statements, but the Quebec government required businesses to go through more than 400 types of non-tax formalities (as of 1998-99).

For example, in addition to the formalities required of all businesses, the simple operation of a campground may require the following authorizations: a restaurant permit and separate liquor permits for the restaurant, bar, terrace and grocery store as well as for meetings; permits for contests, amusement devices or bingo games, plus additional authorization for dancing; compliance certificates for swimming or wading pools; an operating permit for a fishing pier; and a permit for selling propane.

A working group on deregulation set up by the Quebec government in the mid-1980s estimated that one-third of the Quebec economy came under direct regulation relating to entry to an industry, quantities produced, prices sought or salaries paid. The government claims to have eliminated some regulatory requirements, particularly since 1996. But while some may have been eliminated, new ones were created, for example in the area of pay equity, which involves the setting of salaries through non-market processes.

No adequate measure exists of the level of regulation, but the volume of laws and regulations provides an approximation. In April 2003, about 473 laws and 2,345 regulations applied in Quebec, covering 15,000 and 21,000 pages respectively. Laws and regulations the Quebec government adopted in 2002 alone cover 8,789 pages (in French) in the Gazette officielle du Québec. The same year, the federal government adopted 2,222 pages of new acts and new regulations. To comply with the law, Quebecers must thus learn, each year, the contents of about 11,000 pages of new legislative and regulatory texts. At one minute per page, assuming a normal work week of 40 hours, more than a month would be needed to read a year’s legislative and regulatory output. And that does not include municipal regulations.

Everything appears to indicate that the cost of regulation is very high, whether measured by financial cost (the cost to government of applying regulations and the cost to the entities covered by these regulations of compliance and transaction expenses) or its economic cost (in terms of lower efficiency and lost national production). For an idea of the financial cost to business of regulation, we can recall the working group on reducing regulation headed by Bernard Lemaire, which estimated that small businesses in Quebec devoted about 15% of their income to handling federal and provincial administrative formalities. A Fraser Institute study shows that the cost of regulatory compliance in Canada is equivalent to $13,700 for each four-member family. This financial cost is no doubt even higher in Quebec.

The heavy tax and regulatory load Quebecers are forced to bear results from specific conditions: in Quebec, the government controls more sectors of the economy, intervenes in more areas and does so more systematically than do our main Canadian and U. S. partners. More people also receive government salaries. In Quebec, one worker in five (20%) is on federal or provincial payroll. Even if this proportion has declined in the past decade as it has in every other province, it is still considerably higher than in Ontario (16.4%), Alberta (15.6%) or British Columbia (18.7%).

Economic teachings show us there are limits to how far the private sector’s productive capacity can be impaired to finance public sector activities. Beyond a certain stage, tax and regulatory loads crush workers, businesses and investors, and in so doing they compromise economic dynamism. Without a sizable reduction in this burden over the next few years, the people of Quebec, as Premier Charest emphasized in his inaugural address, will remain North America’s most heavily taxed citizens, with a living standard that ranks 52nd among the continent’s 60 states and provinces.

Michel Kelly-Gagnon is President of the MEI.